The Western concert flutes for beginners

A dozen or so years ago there was a prevailing opinion that to start playing a woodwind instrument you would have be at least 10 years old. That was deduced from a theory based on a young person’s teeth evolution process, on their posture, as well as the accessibility to the instruments on the market, which weren’t fitted for people younger than 10. Currently though, younger and younger students start reaching for the flute.

For younger kids there’s a need for a suitable instrument, mostly out of a very trivial reason – they’ve got smaller hands, which are not too capable of holding a standard instrument properly. Keeping them in mind the manufacturers introduced an instrument called recorder, which is a flute with a curved whistle mouthpiece. Thanks to that the flute is much shorter and within reach for smaller hands. The finger-holes in this instruments are designed for the children to have more playability as well. They also don’t have trill keys, which make the flutes a little lighter. Here’s a few recommended companies, with flutes prepared for kids, and a bit older beginners. 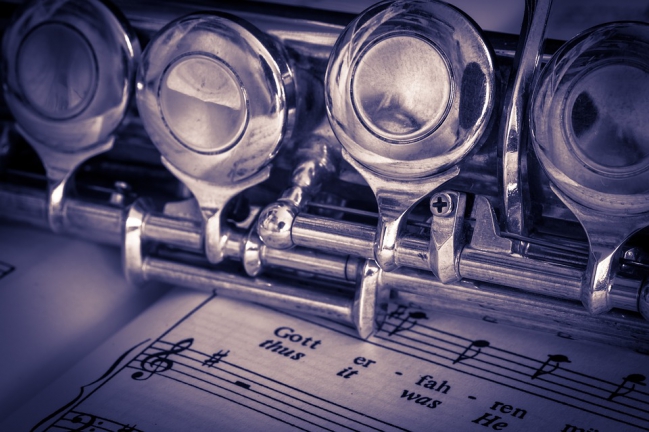 Nuvo
Here’s the instrument designed for all the youngest students. This model is called jFlute, and it’s actually made of plastic. It’s a perfect solution for kids, as they’re light enough for kids to hold the instrument quite properly, being focused on the right position, rather than on keeping up with its weight. The curved whistle mouthpiece makes it much shorter, so that the kids don’t have to place their hands within unnatural positions to reach the holes. The additional advantage stays with having no trill keys, which also makes it lighter. 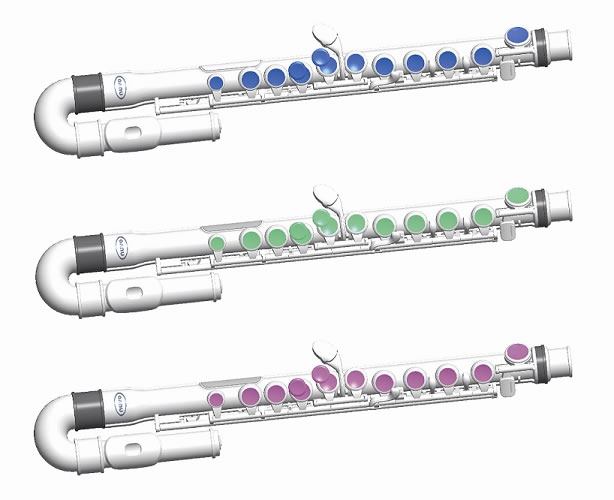 Jupiter
The company Jupiter has been respected for its hand-made instruments for over 30 years. Their beginner models have quite grown in popularity over a span of few last years. Here’s a few of them:

JFL 313S – it’s an instrument with a silver-plated body, along with a curved whistle mouth-piece, accessing the younger players to enjoy it. They’re also equipped with plateau keys, which allow more comfortable hand position (whereas the open-hole keys require the player to cover the holes directly with their fingertips, strictly to allow more diversity, or playing quarter-notes or glissando). Plateau keys help to focus on other aspects of learning, than specifically on mastering the technique in shutting the holes precisely enough. It’s also more simple to play on closed-holes for people with non-standard finger-sizes. What’s more, it doesn’t have a foot joint, nor any trill keys, so it’s much lighter. Its scale reaches D.

JFL 510ES – another silver-plated instrument with the ‘omega’ mouth-piece. The holes are equipped with plateau keys, but its scale reaches C. It uses the so-called Split E-mechanism, enabling to reach a clearer third octave E.

Trevor J. James
It’s a company that have lasted on the market for over 30 years, and it’s taken for one of the best and respected brands specializing in the production of woodwind instruments, both wooden and metal. In their catalogue they have plenty of different Western concert flutes, serving variously-skilled players. Here’s two examples of beginner instruments:

3041 EW – The most basic model with a silver-plated body, Split E-mechanism, and plateau keys. However, it’s not equipped with a curved whistle mouth-piece, which might need a little adjusting for a beginning student.

3041 CDEW – a silver-plated instrument with a curved whistle mouth-piece, as well as a straight mouth-piece added to the set. It has the Split E-mechanism, and an offset G key, which might help some beginners hold their hands more comfortably. Though later on within more advanced levels of playing it’s rather preferred to keep the inline G key. 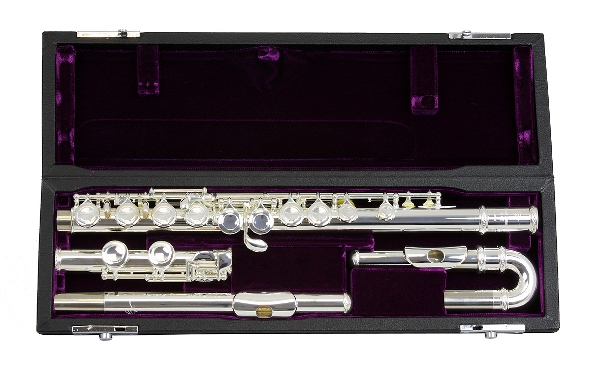 Roy Benson
The brand Roy Benson has been a symbol of innovation within a reachable price for over 15 years. This company works with a lot of professional musicians and composers to obtain the best possible sound with creative solutions, and allow its users to achieve whatever they need in music. Here’s a few of the most popular models:

FL 102 – designed for little kids. Head joint and body are silver-plated, and the head joint is slightly curved to gain more hand-accessibility. It’s equipped with basic mechanisms, with no Split E nor trill keys. Its fitted for kids body has got a separate foot joint, shorter than the standard one by 7cm. Equipped with pads made by Pisoni.

FL 402R – silver-plated head joint, body, and mechanism, keys made of natural Inline cork, so it also has an inline G key. Pads made by Pisoni.

FL 402E2 – the set is equipped with two head joints. Respectively, a straight one, and a curved one. The whole instrument is silver-plated, which gives it a professional look. Also with natural cork keys, Split E-mechanism, and pads by Pisoni.

Yamaha
Teaching aid models of flutes by Yamaha are just a proof that even the low-cost models can serve well for students and their teachers. They sound neatly, intone clearly, and have a comfortable and precise mechanism, allowing for the learning process to flow correctly. They’re great for sensitizing young players to right tones, and techniques, helping them improve their skills and catalogue abilities. Here’s a few Yamaha models:

YRF-21 – It’s a fife made of plastic. It doesn’t have keys, just holes. It’s destined for the youngest players, seeing as it’s really light.

YFL 211 – equipped with Split E-mechanism, closed-holes, and C foot joint (H foot joints allow more sounds, and more power, but are therefore quite longer, so they’re not recommended for kids as much as C foot joints).

YFL 271 – this models has got open-holes, and it’s destined for learners that have their first contact with flute behind them. Equipped with Split E-mechanism and C foot joint.

YFL 211 SL – it’s basically the same as the previously listed model, but additionally, it’s equipped with a metal-plated mouthpiece. 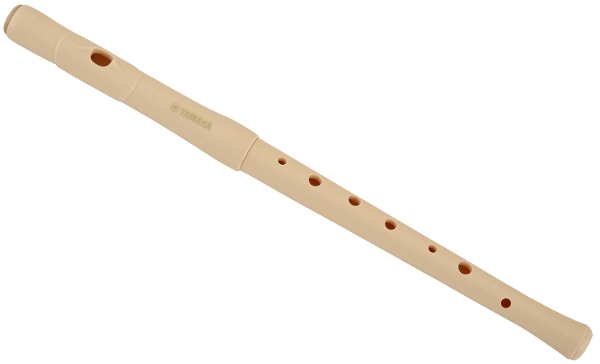 Conclusion
We have to think a lot before we buy the first instrument. It’s common knowledge instruments are not really cheap, and the prices of the cheapest new flutes fall around 2000zł, though it’s possible to find a good second hand item as well. Usually used instruments are exploited too much though. It’s better to invest in a flute made by a reliable company, on which the learner will be able to play for up to several years. When we decide on the instrument it’s good to research the market first, compare the brands and prices. It’s best when we have an option to try it out before we make the final call. In the end, as far as it’s a subjective decision, it’s not the brand that matters, but our personal feel of comfort and playability.